Fingerprints of Love   by Kristina Marie Dizard This last week I felt like I had been hit by a Semi-Truck, and then ran over by it again & again as I lay lifeless on the cold cement. Physically I was not injured, but the stress and turmoil I ensued hit me like a ton...

This last week I felt like I had been hit by a Semi-Truck, and then ran over by it again & again as I lay lifeless on the cold cement. Physically I was not injured, but the stress and turmoil I ensued hit me like a ton of bricks. Even days later. In fact, I am still coming out from underneath the rubble of that emotional and mental disaster. Stress does a funny thing to our bodies. Stress while battling MS is an entirely different ballgame. Our nervous systems flare up and react, days after a traumatic incident our bodies are still coping with what was felt internally. We tend to generalize and minimize these events as we go through this adventure called life, and I wonder how that has taken its toll on us all. 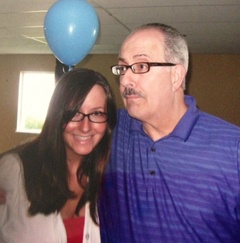 For a few hours, my sister and I had feared the worst; that our beloved father had passed away. For those three hours I caught a glimpse of what my life would feel like and look like without my father in it. I was catapulted into a world which I wish to never return. A cold, desolate land without the loving father I grew up with and let me be frank, that was not a world I would ever want to live in. The grief we felt was unexplainable as you can imagine but after everything he was ok, thank God. Literally, I thanked Him, many, many times.

The day after this event took place my body was extremely worn out. I caught myself passing out mid-day. Fatigue hit hard, and I was so tired I began to wonder if Mister Sandman was having fun at my expense. Watching me pass out randomly and laughing. I began to face these emotions of grief and thankfulness together. Having dad still here meant I had more time with him. How can I make this time count? Can I convince him to move in with me and stop working so I can soak up every last minute with him before the inevitable occurs…?

You get the picture; my mind was operating like a broken clock. Ticking at random times and making progress at a disorganized, slow rate. I tried to fight the anxiety but it was hard. It still is hard. It also forced me to really deal with my own fears. Yes, nobody enjoys thinking of death, but it’s the legacy, the memories, that affect me the most. What if the MS that has already began to steal some of my short term memory decides to take it all? What if I live this life creating memories that will be long forgotten by the time I am 70? Will my life still have meaning if I am in a wheelchair and struggle with memory? Yes.

I realized through this all that even if we cannot remember our past, the fingerprints we have left upon others and this marvelous world will forever remain. Nothing can take them away. Not memory loss. Not this horrible disease we all try to be graceful about fighting. Not even death. In the end, we may not get a say about death, but death has no say as to what we leave behind. He thinks he is the clever thief in the night, but doesn’t realize he has only taken the body. Joke’s on him. Our spirits and souls will forever be imprinted upon this land and in the hearts of those we love, passed down through the generations. 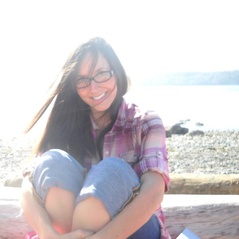 Kristina Marie Dizard has published 2 poetry books: Undefined and Embrace Every Facet, and was diagnosed with M.S. in 2005. Kristina lives in Edmonds, Washington where she advocates for the homeless, enjoys the beach and fabulous book stores.

You can find her online at http://facebook.com/EmbraceEveryFacetKristinaMarieDizard